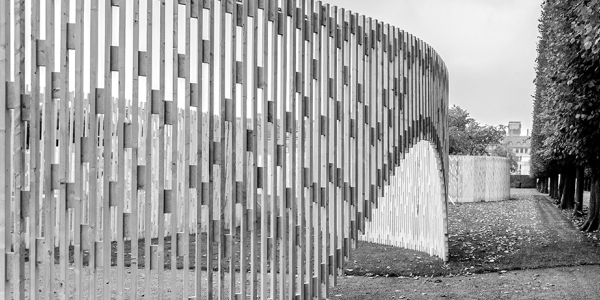 The winning project from the architectural competition for a pavilion in the King’s Garden of the Rosenborg Castle in Copenhagen was opened 13 September 2013.

In February 2013 the Danish Architects’ Association together with the DAA Copenhagen department launched an architectural competition for pavilion after international model with support from the Dreyer Foundation. FABRIC’s project “Trylletromler” – meaning “zoetrope” in Danish – won the competition which was opened in September 2013 in the King’s Garden of the Rosenborg Castle in Copenhagen. The ambition of the pavilion is to draw the audience’s attention to alternative and innovative solutions within construction and will be open to the public for a month.

The jury awarded prizes for four proposals and honoured eleven other proposals.

It is the ambition of the Danish Architects’ Association to make the pavilion competition an annual tradition, giving the Danish public and tourists in Copenhagen the opportunity to see the most excellent examples of modern and alternative constructions in Denmark. The model is similar to exhibitions in other countries such as the Serpentine Gallery in London, and PS1 MOMA in New York.

“We are pleased to support this initiative to have a pavilion – after international model – built here in Denmark for the very first time. The Danish as well as the international public will thus have the opportunity to see alternative and innovative solutions for the construction industry. This is fully in line with our aim to support projects that promote the development of the architectural profession and its interaction with society,” says Bo Rygaard, CEO of the Dreyer Foundation, which has supported the competition.

See the video from the opening of the pavilion September 13, 2013 below